In May 1991, Läpple produced the first sheet metal part for the automotive industry at the former iron factory Maxhütte-Haidhof. Since then, a lot has happened: 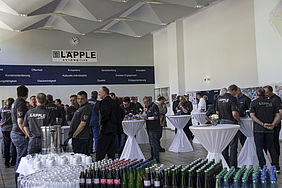 In May 1991, Läpple produced the first sheet metal part for the automotive industry at the former iron factory Maxhütte-Haidhof. Since then, a lot has happened: After 25 years of production currently four hydraulic press lines, two transfer presses, one single press, 18 body shop facilities, nine universal cells, three coil cutting lines and one CDP system handle about 200 tons of sheet metal and 30 tons of aluminum per day.

Everything startet with the purchase of the former cold rolling mill. Before the real production started, a lot of renovation works and cleaning had to be done. Afterwards, the demand grew fast and the production and administrative areas was expanded: In the meantime, the land area is expanded to around 400,000 m².

At the moment Läpple Automotive Teublitz has about 850 employees – as many as never before. In 2015  the site achieved a turnover of more than EUR 170 million.

"Everyone of our jubilees has done a lot of pioneering work in the early days of this site. And in behalf of Läpple Automotive I would like to say thank you for your help and the many years of loyalty," says Managing Director Oliver Wackenhut. He emphasizes that "the experience of long-term employees is very important for the company and it is exceptional and positive that almost 10 percent of the workforce in Teublitz are part of the company since its beginning."

In the past 25 years much has been done at the site - land, warehouses and administrative buildings have been enhanced by investments in machinery and staff laid the foundation for the next few years.