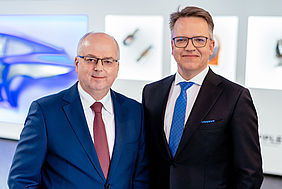 In the business year 2018, LÄPPLE Group increased its turnover by 17.6 percent to 521 million euros compared to the previous year. The company, which is based in Heilbronn on the Neckar, thus remains on its growth course, but remained below its turnover target due to a weakening tooling and mechanical engineering market. The profit margin decreased slightly due to high project turnover as against the previous year. The number of employees has risen from 2,550 in the business year 2017 to a current figure of around 2,700.

ALL SUBSIDIARIES CONTRIBUTE TO THE POSITIVE RESULT

All four subsidiaries contributed to LÄPPLE Group’s positive result in 2018. Body parts specialist LÄPPLE AUTOMOTIVE reached the target figures. One focus during the past business year was the start of serial production for two major projects at the Heilbronn site and in the plant in Teublitz, Bavaria and the successful acquisition of new orders. Rather than a mere pressed part manufacturer, LÄPPLE AUTOMOTIVE is increasingly becoming a specialised module supplier, thus confirming the present growth course.

The FIBRO subsidiary produces standard parts and rotary tables. The market for large tools was weaker in 2018 than in the record year 2017. As a result, turnover targets were not achieved. The focus for FIBRO in 2018 was on the founding of FIBRO Poland and expanding production at its plant in India. In the field of rotary tables, procedures in order processing were improved.

FIBRO LÄPPLE TECHNOLOGY (FLT) concluded the business year 2018 according to plan. As a system engineering company, FLT specialises in automation solutions for various industries. The streamlining of internal processes and optimisations within the product portfolio boosted efficiency sustainably in the company. FLT has already won numerous orders for the innovative axis and gantry system launched at the end of 2017. With the individual adaptability of its components, the system got off to a successful start, particularly in the high-growth segment of battery module production. The simulation and virtual commissioning of systems means significant time savings during later installation.

LÄPPLE AUS- UND WEITERBILDUNG expanded its high-quality training portfolio by offering new study courses and invested in the modernisation of its machine fleet and equipment at both locations in order to create optimum training conditions.

“High productivity – as part of Operational Excellence – is an important pillar of our long-term growth strategy,” says Klemens Schmiederer, Spokesman of the Board of LÄPPLE AG. “We have achieved good progress across the entire corporate group with the help of organisational and procedural changes. In view of the economic slowdown, the business year 2019 got off to a difficult start. In order to ensure that we remain competitive in this challenging environment, efforts to boost productivity will continue to be our top priority.” One element in this strategy is the ONE LÄPPLE management model, which was initiated in 2018. The aim is to intensify collaboration between the individual companies and corporate divisions and thus sustainably boost the competitiveness of the entire Group.

The central product and production process development department, established in 2018, assists all companies within the Group in ensuring effective development work. “In future, we will be relying increasingly on intelligent customer solutions and high process competence in order to exploit the potential for digital and technological transformation,” stated Commercial Director Stephan Itter. “With innovative system engineering concepts, there are good opportunities in the area of electromobility and battery assembly, for example for our subsidiary FLT. FIBRO is working on the development of further products which can be integrated intelligently into production processes.”

On 1 April 1919, August Läpple laid the foundation stone for today's LÄPPLE Group with the establishment of a small mechanic's workshop in Weinsberg near Heilbronn. The company will be celebrating the anniversary of its founding with various campaigns and events for employees and customers. “Particularly in this day and age, it is not at all commonplace for a company to survive for 100 years,” Schmiederer emphasised. “We look back with pride and gratitude – and we aim to remain ready to embrace change in order to seize the opportunities the future offers.”

LÄPPLE Group is a global supplier of car body parts, bodyshell components, standard parts and rotary tables, automation solutions and modern training concepts. It has its headquarters in Heilbronn and four independent subsidiaries.

LÄPPLE AUTOMOTIVE specialises in press parts, assemblies and sophisticated forming solutions in car body assembly for premium vehicles. FIBRO is the European market leader for standard parts in toolmaking and for rotary tables in mechanical and system engineering. FIBRO LÄPPLE TECHNOLOGIE (FLT) operates internationally and is a provider of automation systems for the automotive, aerospace and general industry sectors. The