The automotive supplier LÄPPLE, headquartered in Heilbronn, gets a new management team at the turn of the year 2016/2017. 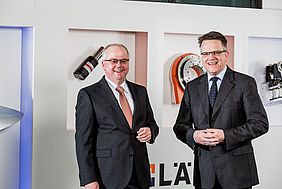 The automotive supplier LÄPPLE, headquartered in Heilbronn, gets a new management team at the turn of the year 2016/2017. Klemens Schmiederer (56) is appointed the new speaker of the Board, following for Dr. Peter Spahn (60). Stephan Itter (49) becomes the new Chief Commercial Chief of the LÄPPLE Group and follows Siegbert Hummel (52). Klemens Schmiederer comes from TÜV SÜD AG, where he is responsible for the Mobility Division and the European region. Prior to that, he had been with Behr for over 25 years (since 2013 Mahle Behr and part of the Mahle business area Thermomanagement), a world-leading OEM for vehicle air-conditioning and engine cooling in passenger cars and commercial vehicles. Klemens Schmiederer was a member of the Management Board and Chief Operating Officer for product development and quality. Stephan Itter comes from ZF TRW, where he worked as Vice President Finance & IT for the Global Body Control Systems (BCS) division. BCS is headquartered in Radolfzell, employs around 5,200 people and produces electronic components that deal with vehicle operation and control.

"In the name of the entire Supervisory Board and the family, I would like to thank Dr. Spahn and Mr. Hummel for their excellent work," says Dr. Gerd Kleinert, Chairman of the Supervisory Board of the LÄPPLE Group. "Dr. Spahn and Mr. Hummel have fulfilled their mission to stabilize and further develop the company on a sustained basis very well. With Mr. Schmiederer and Mr. Itter, two proven automotive experts are joining LÄPPLE, who are very familiar with the supplier's perspective. The new management team can further develop LÄPPLE from a position of solidity and profitability. I cordially welcome both of them in Heilbronn and wish them all the best for their new job. "

Peter Spahn and Siegbert Hummel had implemented extensive structural and process optimization under the motto "earnings before sales" and realized future-oriented investments such as the new transfer press at the plant in Heilbronn. Central reforms in purchasing and IT, the reorganization and long-term securing of the financing structure and the increase in equity was also included. Above all, the board of management duo succeeded in making all business segments profitable and sustainably increased sales and profits. In 2015, the company recorded its strongest business year since 2004. Both managers leave LÄPPLE at their own request to devote themselves to new challenges.